Al Wusta Governorate is situated to the south of both A’Dakhliah and A’Dhahirah Governorates, at the east side it is linked to the Arabian Sea, at the west to the Empty Quarter, and at the south to the Governorate of Dhofar. It includes a large area of central parts of the Sultanate. It is distinguished for having a great number of oil wells.

This Governorate has been created in 1991 as an independent Governorate in order to strengthen efforts since its cities and villages were part of A’Dakhliah and A north and south’ Sharqiyah Governorates and Governorate of Dhofar. It consists of four wilayats: Hayma, Mahout
, Doqum, and Al Jazir. 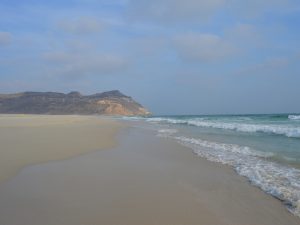 Wilayat Hayma is situated in the center of the Governorate, situated on the Muscat-Salalah road which links the Northern parts of’ the Sultanate with the Southern parts. It is a desert area, therefore its people are migrating Bedouins. This wilayat is famous for its wild animals especially deer and Arabia Oryx which are found at (Jaluoni) area. This privilege is peculiar to this Governorate of Oman. The area of the Oryx Sanctuary is approximately 25 thousand km². It has been listed by UNESCO in the World Heritage List. The other three wilayats arc situated at the coast overlooking the Arabian Sea.

Al Wusta Governorate built schools, hospitals, and mosques and dug artesian wells to provide the Governorates’ population with drinking water. It also constructed roads to join the interior areas to the coastal areas as well as the other parts of the Sultanate, paramount among which is: Nizwa – Hayma – Thumrayt, which has been tarmacked and gave Hayma great importance – joining it with north and south of the Sultanate. It also resulted in seeing modern lift Features in the Governorate.